"Build It and They Might Just Come" to Farson

You could have blamed the wind on a number of events related to the last football game of the season at Farson-Eden High School when the Pronghorns hosted the Kaycee Buckaroos on an overcast and windy Saturday afternoon.

The wind pretty much maintained a steady 20 mph throughout the entire game, and I’m sure it was the culprit when the scoreboard went belly up halfway through the third quarter, although I’m not sure how. Come to think of it—thanks to the wind—the telescoping flagstaff wouldn’t stay extended at its full height either, so Old Glory and the Wyoming state flag flew at a height that was more like half-mast. Even though the “new” football field at Farson is only five-years-old, both goal posts are leaning thanks to five years of wind abuse in this remote outpost of Wyoming’s high desert.

I suppose these kind of things aren’t uncommon when it comes to small town high school football despite the newness of any given facility. And so, some things about this level of play are just innate and can’t be avoided.

Fewer people in communities like Farson and Eden also means that those who are involved simply have to do more. In the case of the Pronghorns, an assistant coach and a handful of players on the team (even starters) help get the venue ready—delivering 10-gallon water coolers to both benches, placing the pylons and yard-markers on the field in their respective places, raising the Flag, wrapping each goal post with protective cushioning should their be a player collision, and then doing it all in reverse after the game.

Things have really changed since the last time I attended a game at Farson in 2013—their home field was across the street at the city park in a sectioned off area of the softball fields. It was pretty crude, but as one of the Pronghorn players pointed out to me, “Nothing says ‘small town high school football’ than softball fields being used for a six-man gridiron.”

Today, things are different in Farson. If there was a football version of the movie Field of Dreams (you know, “Build it and they will come”), it could be Farson as it is the home to the only six-man gridiron in Wyoming with an artificial turf, surrounded by an equally cosmetic six-lane, 400-meter track. Instead of being surrounded by corn, the facility is surrounded by the high desert emptiness that is mostly sagebrush, prickly pear cactus, and rabbitbrush. 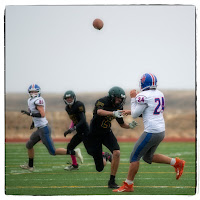 Despite this apparent opulence in the middle of the high desert, floodlights are absent so all of their games are played out on either Friday or Saturday afternoons.

Talking to some of the Farson-Eden players before the game, they aren’t all that excited about their home artificial turf—they prefer natural grass because it’s a bit softer and not as “grippy.” On the other hand, I suspect many of their opponents look forward to the novelty of playing a game in Farson knowing it’s void of any hidden anomalies like bumps, hard and barren dirt patches, and varmint holes that are so common to a typical and imperfect small town high school football field.

Postscript: In their first season of six-man football in 2009, Farson-Eden was winless, but in less than a decade the Pronghorns secured the school’s first football state title in 2018 and did it again in 2020. Here’s a story about their rise to Wyoming’s six-man ranks.

You know I've had your page bookmarked for years and check it once in a while to see if you post anything new. And today I saw a new Flickr image, see the link, and here is your post.

Very cool. If you're on Twitter, find me @Sykotyk. Always enjoyed following your travels of Montana and Wyoming.